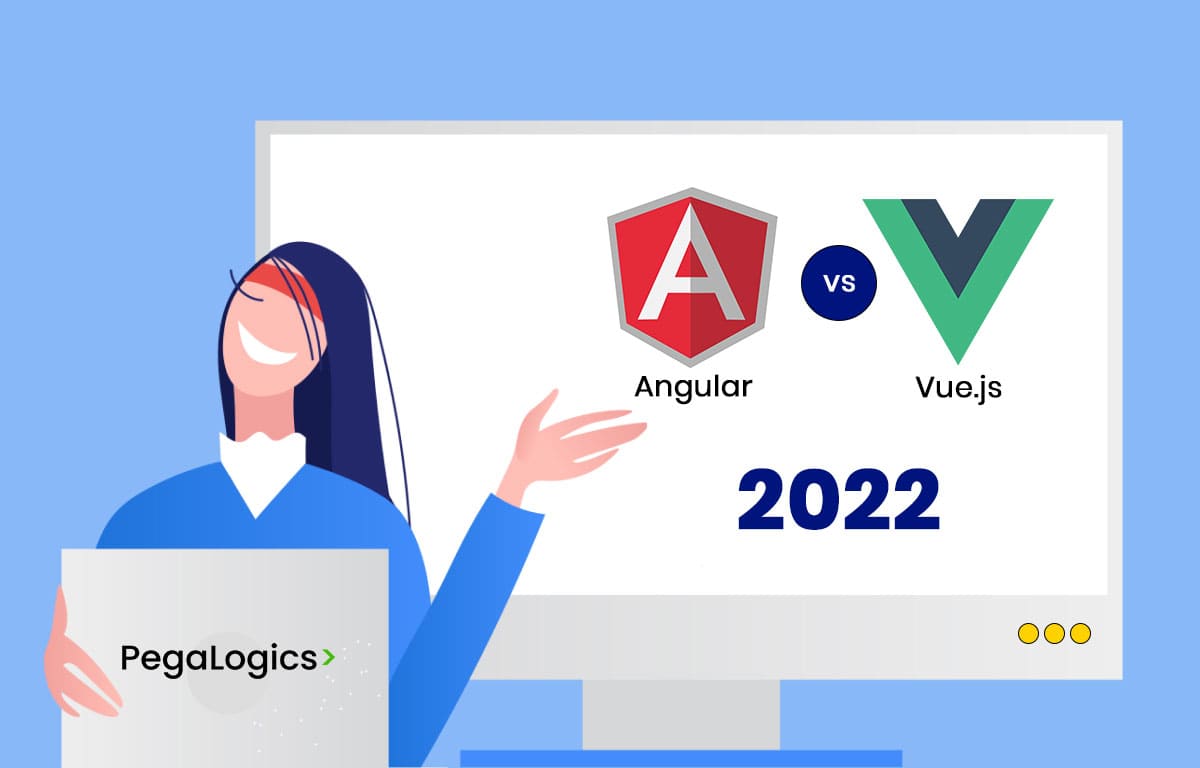 Do you know what? JavaScript has continuously been the most popular programming language. In addition, there are at least 24 JS frameworks and approximately 83 libraries competing for a spot in web development.

But the real question is: which one should you use- Angular vs. Vue.js?

The answer to this question is not as simple as you might think. It depends on your needs, your project requirements, and personal preferences. It also depends on the specific features you’re looking for in a framework.

Besides all of that, you also have to keep in mind that the JavaScript landscape is constantly changing. New frameworks are released all the time, and old ones fall out of favor.

If you’re looking for a comprehensive answer to the above question (Angular vs. Vue.js), you’ve come to the right place.

In this article, we’ll compare Angular and Vue.js, two of the most popular JavaScript frameworks. We’ll take a close look at their features, performance, popularity, and more. By the end of this article, you should have a good idea of which framework is right for you.

Angular is a comprehensive framework that comes with everything you need to build large-scale enterprise applications. It’s been around for a long time, and it’s backed by Google.

One of the best things about Angular is that it’s a complete solution for a web development company. It includes everything you need to build a web app, from the user interface to the data layer.

Angular is also well-suited for building complex applications. It has a lot of features that make it easy to handle large-scale projects. Some of the world’s most well-known companies, such as Gmail, Forbes, Upwork, and PayPal, use Angular to build their applications.

The Model View Controller (MVC) architecture is a design pattern that splits an application into three separate components: the model, the view, and the controller.

Two-way data binding is a feature that allows you to automatically update the view when the model changes, and vice versa.

Angular has good support for building mobile applications. There are several tools and frameworks that you can use to build mobile apps with Angular.

Angular has a large and active community. There are many resources available to help you learn and use Angular.

Angular is backed by Google. This means that there is a team of developers working on Angular full-time.

One of the best things about Vue.js is its flexibility. It’s easy to integrate into existing projects, and it scales well as your project grows.

Vue.js is also well-known for its excellent documentation. The documentation is clear and concise, and it’s easy to find the information you need. Some of the world’s well-known companies, such as Facebook, Google, and Laravel, use Vue.js in their projects.

Components are reusable pieces of code that you can use to build your app. You can create your own components, or you can use existing components from third-party libraries.

Vue.js provides a way to handle events in your app. You can use event modifiers to automatically prevent default behavior or to stop the event from propagating.

Vue.js comes with a router that you can use to define the routes in your app. The router uses HTML5 history API to navigate between pages without refreshing the page.

Vue.js supports server-side rendering. This means that your app can be rendered on the server and then hydrated on the client.

Vue.js has a large and active community. There are many resources available to help you learn and use Vue.js.

Now that we’ve seen the basic overview of each framework let’s compare them side-by-side.

Let’s compare the two frameworks with a few key criteria:

With the Angular frontend development framework, you must have prior knowledge of terms like TypeScript and MVC in order to create an app. However, this isn’t the case with Vue though.

Vue.js framework is much easier to learn as it is just JavaScript. Its inbuilt templates and simple structure make it much easier to get started with.

Both Angular and Vue.js are performant frameworks. However, Vue.js has an edge over Angular when it comes to performance.

This is because Vue.js uses a virtual DOM while Angular uses the real DOM. The virtual DOM is a JavaScript representation of the real DOM. This means that Vue.js only updates the parts of the DOM that have changed, which makes it more performant than Angular.

There’s no doubt that Angular is more popular than Vue.js. However, Vue.js is gaining popularity at a rapid pace.

Another key difference between the two frameworks is their architecture. Angular uses MVC while Vue.js uses MVVM. Both are effective architectures, but MVC makes it easier to create large applications.

When it comes to scalability, Angular is the clear winner. This is because Angular is a full-fledged framework that provides everything you need to create large applications.

Vue.js, on the other hand, is a lighter-weight framework. It’s flexible and can be used with other libraries to create large applications, but it doesn’t have as much built-in functionality as Angular.

The size of your app and the time it takes to load are important considerations when choosing a framework. Angular apps tend to be large and take longer to load than Vue.js apps.

This is because Angular comes with a lot of built-in functionality, which makes the app size larger. While Vue.js is a lighter-weight framework, so the apps tend to be smaller and load faster.

So, which should you choose for your next project – Angular or Vue.js? The answer is it depends on what you need and what your team is comfortable with. If you want a more established framework that will be around for a while and has a robust community behind it, go with Angular.

But if you’re looking for something that’s growing in popularity and offers a bit more flexibility, then Vue.js may be the better option for you. Whichever route you decide to go, make sure to work with an experienced web development agency that can help guide and support your team through the entire process – from planning to execution.