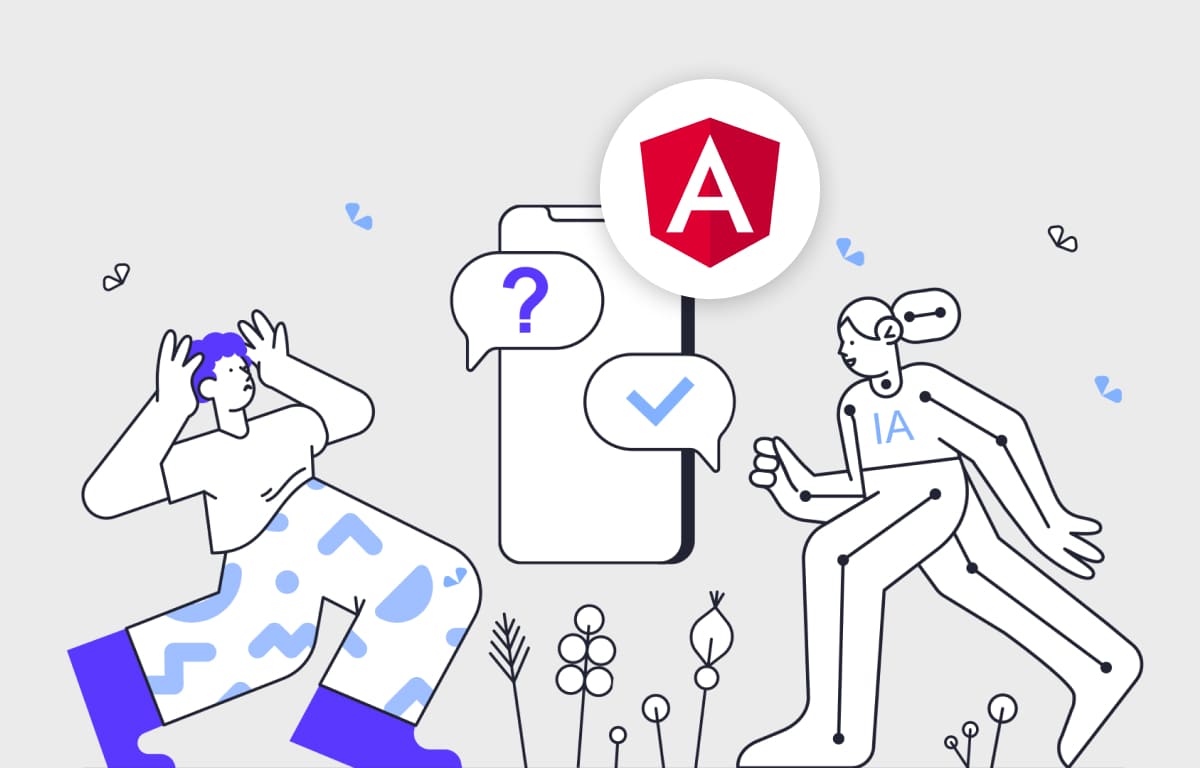 There is no secret that Angular app development is one of the most popular and in-demand services nowadays. It helps companies and startups create digital products that can be used anywhere – from browsers to smartwatches.

That’s not a small number, especially when you consider that Angular has only been around for a few years. Not just that, big brands like YouTube, Upwork, and Forbes all use Angular to build their websites and digital products.

But before we do that, let’s take a quick look at what Angular is and how it works.

Angular is a popular yet powerful JavaScript framework used for building single-page applications (SPAs) and dynamic web apps. With Google maintaining it, this framework has a significant advantage over other ones. How? Because of its commitment to improving and tweaking functionality on the platform.

Using Angular also makes web app development more accessible, as it comes with a range of tools and features built-in, including templates, dependency injection, and data binding. It’s also easy to scale up as Angular can be used for large projects that require more powerful features like server-side rendering or an offline app cache.

With so many advantages, it’s no surprise that so many businesses are turning to Angular for their next digital product. But let’s dig a little deeper into why Angular is the best option.

Why Should Businesses Use Angular?

1. Its functionality and performance are unrivaled:

Angular’s functionality and performance are unrivaled. It doesn’t matter if you’re working on a mobile or web app; Angular gives you all of the tools and features you’ll need to create your digital product.

Its versatility is one of its greatest assets and provides countless opportunities for customization in terms of the codebase, libraries, frameworks, etc. You also have complete control over your markup as it doesn’t force any structure or template language on you as some other frameworks do.

The framework’s performance is stellar. It was designed to performant right out of the box without being overly opinionated about how you achieve this. There are currently 138 766 Angular live websites and 164 112 sites that utilize historical data. In addition, 2736 web pages are located across India alone!

Angular uses TypeScript, a superset of JavaScript, allowing developers to write more structured and organized code. Besides, this makes your code easier to manage and helps you avoid common error-prone code patterns.

The TypeScript compiler also gives you useful feedback as you type your code, which can help you discover errors early and avoid them from becoming major issues later.

Furthermore, TypeScript is a language that is easy to learn for anyone with a basic understanding of JavaScript. Also, this makes it easier for new developers to get up to speed with Angular and start contributing to your project right away.

Angular’s CLI (command line interface) is a great tool that makes the web app development process simpler, quicker, and more efficient. With it, you can generate new projects, add components to your codebase, run tests and build applications with just a few commands.

Besides, this can save you a lot of time and effort, as you don’t need to worry about setting up the project structure or configuring build tools. The CLI will handle all of that for you to focus on the code itself.

4. It has Declarative UI:

Angular’s declarative UI makes it easier to create and manipulate complex user interfaces. With it, you can define your UI using simple HTML tags and attributes without writing a lot of JavaScript code.

This makes your code more concise and easy to read, saving you time working on large projects with complex UIs. Besides that, the declarative API is more robust. Plus, it is resilient to errors which can help you avoid potential bugs in your code.

Also, Angular’s declarative UI is more performant than other frameworks’ UIs because it uses a virtual DOM, a JavaScript representation of the actual DOM. This means that only the differences between the two are updated much faster than updating the entire DOM.

5. Its MVC architecture speeds up development:

MVC stands for Model-View-Controller. The model is what holds data and does anything with it (like calculations), while views are what you see on your screen. A controller decides what happens when you click something in a view.

In addition to being easy to understand, an MVC architecture also makes it easier to update portions of your application separately from others. It’s called separation of concerns and allows engineers to better manage updates by updating parts individually. And hence merging them into a cohesive whole at release time is also manageable. This development speed is one reason why many startups or other businesses prefer Angular.

Angular’s dependency injection system is one of its most powerful features. It allows you to inject dependencies (services, components, etc.) into your code without hard-coding them. The most important part of this is that you can easily extend it with a new dependency. This makes the project more flexible and testable.

It also makes it easier to refactor your code, as you can simply update the dependency injection configuration instead of changing the code itself. This can save you time and effort and prevent potential bugs from being introduced into your code.

7. Angular Material provides a unified look-and-feel for your app:

Angular Material is a UI component library that seamlessly integrates with Angular, making it easier to create modern, responsive web apps. It provides a set of reusable and accessible UI components that you can use in your projects and many resources and tutorials to help you get up and running quickly.

With these powerful benefits, it’s no wonder why so many startups are using Angular for their digital products and applications. Angular is the right choice if you’re looking to build your project quickly and with minimal hassle.

Single-page applications (SPAs) are becoming more and more popular as they make for a much smoother user experience. They load data on-demand instead of all at once, which makes the loading process seem much faster than it is. By making it easy for consumers to navigate and get the information they need, you can enhance user retention and time spent on your site or app.

Angular makes it easy to create single-page applications with built-in routing support and templating engine. And there are numerous plugins and extensions available that can help you further enhance your SPA’s functionality.

9. There is large community support available:

Angular is backed by a large and active community of developers who constantly create new tools and updates. This means that you have access to a wealth of knowledge. You have tutorials and other resources that can help make your Angular app development process much smoother.

No matter what your project entails, you’re sure to find the help and support you need within the Angular community.

Now that you know more about the benefits of Angular and why it’s such a popular choice among tech startups, it’s time to start building your own digital product or application with this powerful framework. With its impressive features, intuitive architecture, and support from a large community of developers, Angular will help you create a fantastic app!

Moreover, if you need expert help, you can contact a mobile app development company specializing in Angular app development. Besides, they will be able to guide you through the entire process, from conception to launch, and help you create a successful product.